In 2021 the Logistics Division worked on preventing the spread of COVID-19 infections. The number of infections did not cause any major disruptions in our logistics processes thanks to our efforts, appropriate monitoring and sophisticated solutions. In the first half of the year, the acceptance of a long-awaited investment in the Railway Cistern Filling Station took place: the fourth NB04 rail filler. This investment will make it possible to satisfy 100% of our loading needs on the railway in the refinery while substantially lowering costs. This investment along with other additional elements has also contributed to a more than 20% increase in some moments of the number of rail maneuvers on the rail siding. Optimizing these processes coupled with such significant growth was and still is a challenge for the employees of the Logistics Division and Lotos Kolej. In Q4 2021 the expectations of all vehicle carriers in the Lotos Group resounded more strongly in terms of substantial rate hikes for vehicle transport (significant increase in the costs of fuel and drivers’ salaries). The cost pressure and therefore the pressure on the rates for services rendered by suppliers is present in all logistics areas. 2021 also saw highly extensive involvement on the part of key employees from the Logistics Division in work to carry out remedial measures during the Lotos Group and PKN merger.

The LOTOS Group is engaged in exploration and production activities in Poland, Norway and Lithuania. In 2021, hydrocarbons were produced from fields located in:

The LOTOS Group consistently adapts its logistics operations to the requirements of its trading operations and builds an efficient distribution system meeting the expectations of its customers, while being continually optimised. The purpose of those measures is to build an optimum logistics chain that would function efficiently in the constantly changing external and internal environments.

Grupa LOTOS enjoys considerable cost advantages because of its direct access to product and feedstock pipelines linking the refinery in Gdańsk to the liquid fuel handling facilities at Port Północny. Maritime transport plays the key role in the Company’s export of oil products, while accounting for a significant portion of feedstock deliveries and components used in production processes.

In 2021, the Company received approximately 7.2 million tonnes of crude oil from 87 tankers through PPPP Naftoport, including 12 cargoes of oil from the B3 and B8 fields and five cargoes of Lithuanian oil.

Logistics infrastructure of the LOTOS Group

In 2021, the Company optimised its inventory structure in order to achieve the minimum level of inventory holding costs while securing the commercial needs of the LOTOS Group.

As part of its efforts to optimise operating costs, the Company continued to work on its use of rolling stock, which yielded numerous benefits in terms of costs and the number of rail tank cars used. At the same time, it made furtherupgrades to its railway infrastructure to accommodate loading of tank cars with a payload capacity of up to 22.5 tonnes per axle, which significantly increased daily shipments of oil products and eliminated the need to load and dispatch about 3,100 rail tank cars per year while keeping the volume unchanged.

In secondary logistics of fuels, the Company adopted a model of cooperation with transport companies that guaranteed appropriate flexibility in customer service with fixed costs curbed to the minimum.

In 2021, the Company continued to develop small marine cargo handling. Its transhipment terminal on the Martwa Wisła river is planned to be launched in 2024.

Seeking to expand its capacity to dispatch refinery products and to adapt its infrastructure to conditions prevailing on the domestic fuel market, the Group completed a project to construct the fourth rail loading facility, placed in service in May 2021.

In 2021, the Company deployed B2B interfaces for electronic data exchange with PKN Orlen. Interfaces for data exchange with Anwim were also designed and developed, while the production launch is expected to take place in 2022. The Shell data exchange upgrade project is also underway; it was commenced in 2021 and is scheduled to end in 2022. However, the largest effort was given to prepare IT systems at LOTOS Asfalt to spin off the processing refinery from Grupa LOTOS. The first stage of the project was completed in November 2021, and the second stage, including the switchover of all dispatch systems, is currently under way.

In response to market demand, contracts to expand and upgrade the fuel terminal in Piotrków Trybunalski were signed by the Company on January 14th 2020. After nearly two years of arrangements, design work and preparations, a building permit for the terminal was obtained on November 15th 2021, and construction work began. The project will quadruple the terminal’s storage capacity, to about 11,000 cubic metres, while doubling the amount of fuels it can handle. The terminal will allow the distribution of additive-enhanced gasoline, diesel and liquefied petroleum gas (LPG) at maximum filling speeds permitted by law. Owing to the technical solutions applied, the terminal will be put into operation at the „highest” market standard, also in terms of process automation. Once the occupancy permit is obtained, dispatch of all products from the terminal will begin later this year to enable the terminal to be included in the contracting of handling capacities as of the beginning of 2023.

Storage and distribution of fuels

LOTOS Terminale has a subsidiary LOTOS Biopaliwa, which produces 100 thousand tonnes of biofuel components per year.

An important element of LOTOS Group’s production security is the ability to dispatch products by rail from the refinery in Gdańsk. LOTOS Kolej, a specialised rail operator, is responsible for the provision of comprehensive rail logistics services throughout the Group. 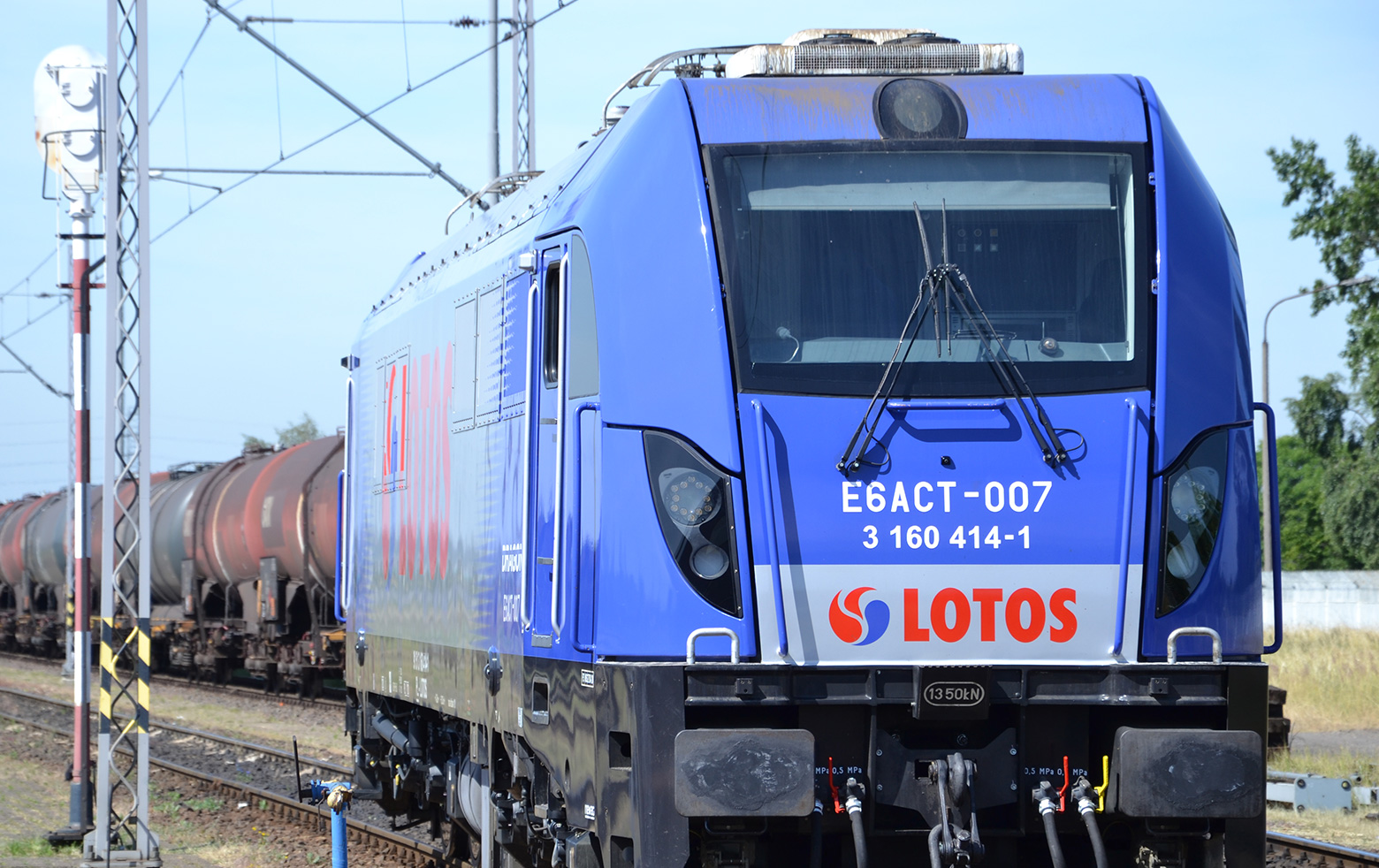 The year 2021 was a year of growth for the freight market in Poland. As at the end of December 2021, 112 carriers provided freight transport services under licences issued by the President of the Office of Rail Transport. Between January and December 2021, they transported 243.6 million tonnes of cargo, 9.1% more than the year before. At the same time, the average haul distance fell, which resulted in a slightly lower (7.2%) increase in freight work (measured in tonne-kilometres) between January and December 2021.

Source: LOTOS Kolej's in-house analysis based on the Office of Rail Transport data

Source: in-house analysis based on the Office of Rail Transport data

Under contracts concluded in 2021, LOTOS Kolej purchased two and leased twelve modern electric locomotives. In the reporting period, LOTOS Kolej continued its purchases of modern intermodal rolling stock, co-financed with a PLN 74 million subsidy obtained under the Infrastructure and Environment Operational Programme for 2014–2020. The project was designed to increase LOTOS Kolej’s share in the intermodal transport market starting from 2020.

The company continued to expand its transport business in Germany. In 2021, using its own and German train drivers, the company transported more than 565 thousand tonnes of freight. By expanding the operations in that region, LOTOS Kolej broadened its offering, while providing its customers with fast and reliable transport services between Poland and Western Europe. LOTOS Kolej continued its operations in the Czech Republic. In 2021, using its own train drivers as well as services provided by Czech operators, the company transported over 33 thousand tonnes of freight. In May 2021, the company carried out the first rail transport across the Polish-Lithuanian border, thus implementing the agreement with Lithuanian Railways on the organization of international freight transport.

Competition for the upstream business

Exploration and production activities in Poland