Exploration and production activities in Norway

Exploration and production activities in Norway are carried out through subsidiary LOTOS Exploration & Production Norge AS (LOTOS Norge) of Stavanger.

At year-end 2021, LOTOS Norge held interests in 30 licences for exploration, appraisal and production of hydrocarbon reserves in the Norwegian Continental Shelf, compared with 28 licences at the end of 2020. On March 26th 2021, the company was formally awarded three new licences in the Awards in Predefined Areas (APA) 2020 licensing round: PL 1098 (50% interest), PL 1099 (30% interest) and PL 1091 (20% interest). The PL 1098 and PL 1099 licences are located within the new development project NOAKA, and the PL 1091 licence lies in the Sleipner area. In February 2021, under the company shareholders’ resolution, the company relinquished its interest in licence PL 871 in the Heimdal area. 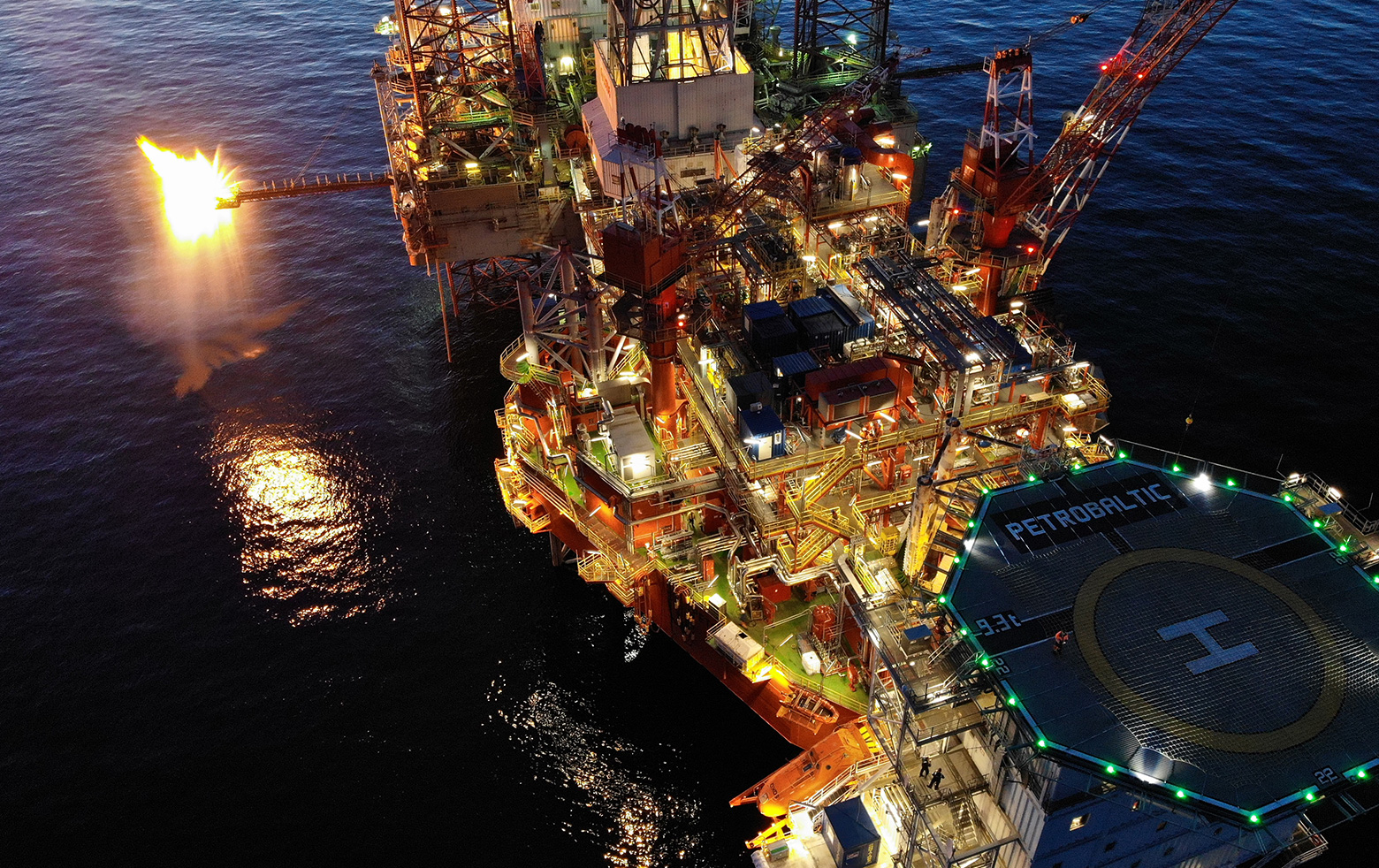 LOTOS takes steps to develop its portfolio of concessions in Norway on a regular basis. On September 8th 2021, LOTOS Norge submitted applications in the APA licensing 2021 round. On January 18th 2022, following the conclusion of the licensing round, LOTOS Norge received an offer to participate in four of the licences applied for: PL 1135 (30% interest, Operator: PGNiG with a 70% interest), PL 1142 and PL 1143 (17.94% interest, Operator: AkerBP with a 73.01% interest) and PL 1144 (30% interest, Operator: AkerBP with a 40% interest). Three licences are located in the NOAKA project area, where LOTOS will cooperate with AkerBP. One of the areas, applied for jointly with PGNiG, is located in a part of the North Sea where the company has not yet explored for or produced hydrocarbons.

In 2021, LOTOS Norge, operating as part of a consortium, produced natural gas and condensate from fields located in the Heimdal and Sleipner areas. In October 2021, first oil was produced from the Yme field. In 2021, the LOTOS Group’s average hydrocarbon production in Norwegian fields was 11.2 thousand boe/d for the LOTOS interest (22.8% less year on year), which accounted for 64% of its total production volume. As at the end of 2021, the LOTOS Norge’s 2P hydrocarbon reserves in Norway totalled 23.0 million boe (including 15.1 million boe of crude oil and 7.9 million boe of natural gas), which accounted for 33% of the Group’s total 2P reserves.

Besides hydrocarbon production, in 2021 in Norway LOTOS Norge carried out field development work, including on the Yme, NOAKA, Trell/Trine fields, as well as exploration work.

Competition for the upstream business

Exploration and production activities on the Norwegian Continental Shelf remained very strong in 2021, despite the continuing COVID-19 pandemic. The year saw a year-on-year increase in hydrocarbon production and a stable level of investments in new field development, additionally supported by the tax relief package introduced in Norway. High production volumes, coupled with high commodity prices, particularly record high prices of natural gas, pushed hydrocarbon revenues on the Norwegian Continental Shelf to an all-time high in 2021.

The following key statistics for 2021 provide a picture of the market environment in Norway:

As at the end of 2021, hydrocarbons were produced from a record-high number of fields (94).

In 2021, the daily hydrocarbon production in Norway averaged 3.97 million boe/d (an increase of 2% year on year).

The year 2021 was characterized by high investment activity of exploration and production companies on the Norwegian Shelf. Total investments, including exploration costs, were NOK 174.1 billion (-1.4% year on year). As part of the activities five new fields were brought online, eight PDO plans were submitted for approval, 40 exploration wells were drilled, and 18 new oil and gas fields were discovered. The Norwegian Petroleum Directorate assumes a stable level of investment activity on the Norwegian Continental Shelf over next five years. The average annual level of investments, including exploration costs, is projected at approximately NOK 175.5 billion until 2026.

Despite the high production volumes and high investment activity in the development of new fields, greenhouse gas emissions associated with production activities on the Norwegian Continental Shelf are lower. The target is to reduce CO2 emissions by half by 2030, compared with 2005.

The Norwegian Continental Shelf continues to offer attractive potential resources. According to the estimates of the Norwegian Petroleum Directorate, the total potential resources of the Norwegian Continental Shelf are approximately 15.8 bcm of oil equivalent, of which nearly half has been produced from the fields. A half of the resources, i.e. approximately 8 bcm of oil equivalent, may still be produced. This includes both proved reserves in production fields and fields under development (ca. 2.7 bcm in aggregate), contingent resources in new discoveries (ca. 1.4 bcm), as well as prospective resources identified in exploration licence areas (ca. 3.8 bcm, or 24% of total potential resources).

In summary, the Norwegian Continental Shelf remains an attractive area for E&P companies due to, among other things the high resource prospectivity, still high potential for new oil and gas discoveries, positive trends in cost reduction, improved efficiency and development of new technologies, active market, as well as stable fiscal and regulatory environment.

2021 was a year replete with landmark events including the most important one in the Company’s history. From the outset of its existence, we have worked on starting extraction from the Yme deposit. The most important milestone was achieved precisely on 23 October 2021, i.e. First Oil. The Company’s share of output in 2021, namely, the quantity of 28 thousand bbl was placed on the market, and the subsequent fifth tanker in a row carrying oil from Yme was dispatched at the turn of February and March 2022. In 2022 we will reach the full production capacity from all wells, and we will start drilling additional ones. This will allow us to maximize the production volume from Yme, with very favorable macro conditions.

The introduction of new tax exemptions by the Norwegian government in connection with the development of the pandemic also accelerated the design work in the NOAKA project area and in Trell and Trine fields. For both these fields, in 2021 we managed to create development concepts and the submission of Development Plans (PDO) is scheduled by the end of 2022. We also worked on the applications for the Norwegian licensing round APA 2021. According to the decision of the Norwegian authorities issued in January 2022, we received four licenses, as a result of which the Company’s license portfolio increased to 33. All new licenses contribute to the development of the current assets and on one of them we will have the opportunity to develop another area of cooperation with PGNiG Norway.

In 2021, the production of crude oil and natural gas was on average 11.2 thous. boe/day which, combined with a very favorable macro environment, allowed us to achieve the best results in the Company’s history and generate considerable funds to secure a large part of future capital expenditures.

Key assets of the LOTOS Group (production levels and licences)

The LOTOS Group’s key licence assets in Norway include:

In addition to its interests in the fields, LOTOS Norge also holds interests in the Heimdal and Sleipner area gas hubs (5% and 15%, respectively), i.e. the gas and condensate processing and transporting centres. It is worth noting that the Sleipner area is of strategic importance to gas exports from Norway to Central Europe and the United Kingdom. 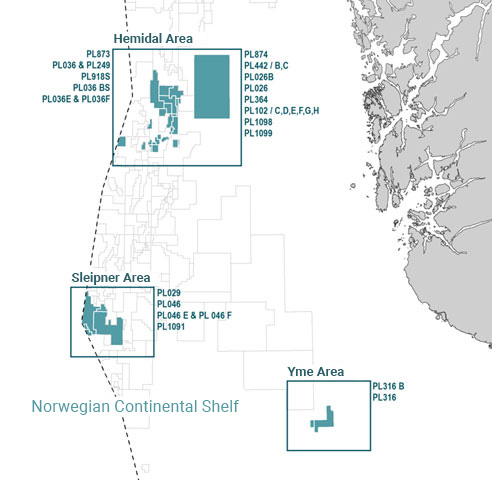 Gas produced from the Heimdal and the Sleipner fields is injected into the Gassled pipeline system, and then delivered to off-take points in the UK and continental Europe (the Netherlands, Germany).

Production from the Yme field, which is in the final stages of development, will be carried out using the leased Maersk Inspirer platform. The produced crude oil will be loaded onto a tanker and transported to various off-take points, depending on crude oil parameters and market conditions.

Exploration and production activities in Poland

Exploration and production activities in Lithuania